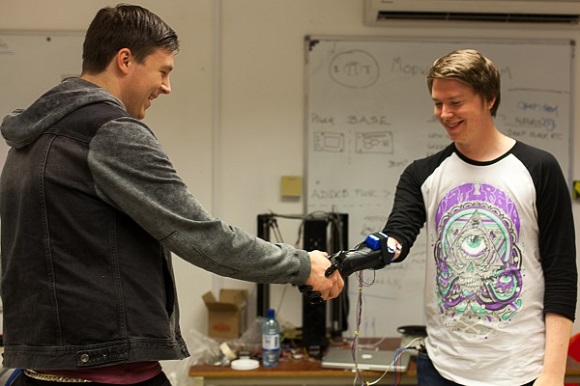 An engineer from Bristol develops robotic hands using a 3D printer and a scanner to make a replica of a man’s healthy hand.

Daniel Melville was born without the right hand, which was later substituted with a bionic hand. Joel Gribbard managed to scan the man’s left hand and t0 make the right one with a 3D printer. Some time before Daniel saw Joel Gibbard’s appeal for funding help to create reasonably priced and available for the majority of people robotic hands. 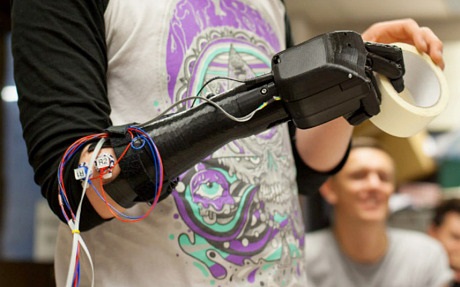 Daniel was eager to help Gibbard try out his new hand. It took about two days to create it and at a price of £300. This is the first 3D printed robotic hand that has been created with both a 3D scanner and printer. Melville said that the new hand fitted as if a glove. He could never imagine that it would be so easy to get it.

As a rule he would have his arm molded and then it would take weeks or even months to get a socket. However this 3D printed hand is really great and with time it will become even greater. The only thing he regrets is that he didn’t get it when he was younger. He believes that a 3D printed Power Ranger Hand would have been the right one for him and would have helped him feel better about his peculiarity. There are a number of various hands available but they are a lot more expensive than even his car, there’s hardly anyone who could afford that.

Mr Gibbard, aged 24 is the founder of Open Bionics, Bristol. It took him 20 minutes to scan Melville’s arm using a 3D sensor attached to the iPad, then 40 hours later the 3D printed arm was ready. Hopefully this robotic prosthetic hand will be available on the market at about £1,000 or less by the end of next year. In one of the interviews Gibbard confessed that it was a great relief for him to see that all his efforts were not in vain and somebody could really benefit from what he created. When someone sees that Dan can easily pick up things, write and do various other things, they get impressed. And when Gibbard shook Dan’s hand he made for him, it seemed surreal.

His next project weighs twice less than the first prototype and it will look even better, which will make considerable difference for users. His first prototype was made of plastic, but the new model will be created with the new material called NinjaFlex. It’s more flexible and much stronger in comparison with plastic. The new prototype was developed within about 18 months.

Some time earlier a five-year-old girl from Inverness called Hayley Fraser was about to become the first kid in the UK to get a prosthetic 3D printed hand. The difference is that it was made of plaster cast of her own arm instead of a scan. Her parents found help from E-nable – a US based network of volunteers whose purpose is to develop prosthetics for kids. 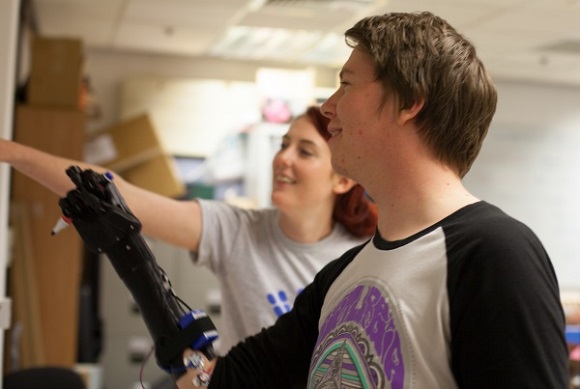 3D printing is often considered to become the future of manufacturing. Its market is likely to grow to $4.8 billion by the end of 2018. For engineers it’s a good way to produce greater speeds, lower costs and lighter weights that are difficult or simply impossible to create in a different way.

Also I may be interested in the following video where Joel Gibbard talking about bionic hands at the TED in Exeter earlier this year: