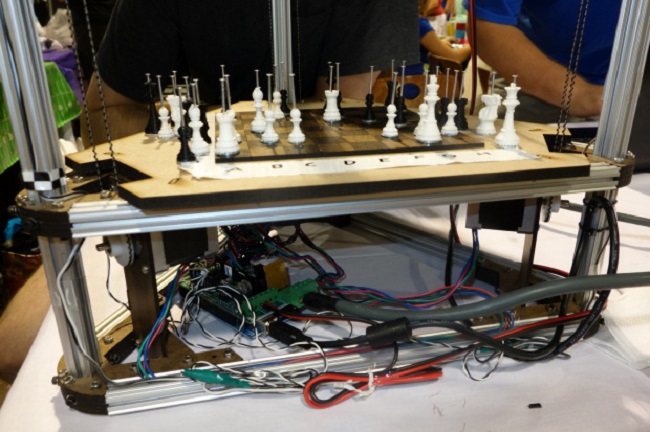 When not used to save and to change lives for the better, 3D printing technology sits somewhere at the top where fascinating inventions are played with. From 3D-printed costumes, weapons, and accessories, the technology can also be utilized as a robot that plays—a robot that plays chess in particular.

To the tune of the Beatles’ “With a Little Help from My Friends,” software maestro, Patrick Graham made a decision to develop a robot that will play chess in time for the Raleigh Maker Faire 2013 in North Carolina. As the decision was made with just a little more time left on the clock, the Beatles’ hit song will be the only option to make his quick decision come true. Because the creator has his group from Makerspace, he knew it would be only be a matter of time before a functional 3D printer will be transformed into a chess player.

The first help came in the form of a Rostock Delta Bot 3D printer, which Graham knew would just be the perfect robot to play chess. Making the 3D printer into a functional chess player required more than a couple of changes. The first one to go was the printer head. In its place was the electromagnetic head that would primarily function as the muscle in moving the chess pieces all across the board. 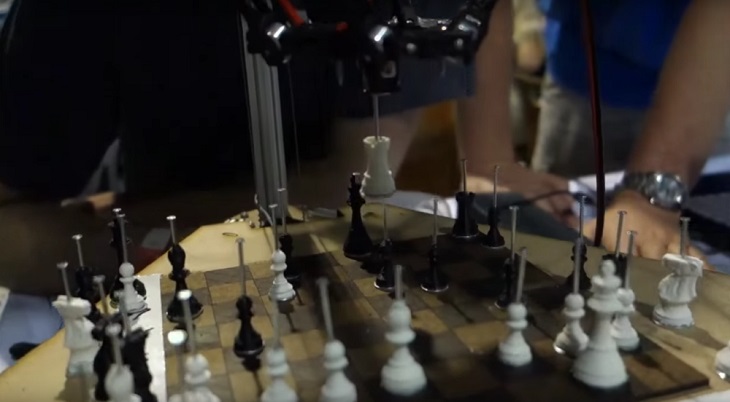 The second one to go was the printer bed. What used to be the printer bed became the chess board. Instead of its original size, Graham used a smaller version, about 7 inches on all sides to allow the electromagnetic head to move the pieces with ease even all the way to the farthest corners of the board.

The chess pieces were made available courtesy of another help from a friend in Makerspace. All of the chess pieces were 3D-printed to fit as needed on the chess board. Putting the pieces together to allow the electromagnetic head to work as designed was another task that required more than another set of hands. A couple of his friends helped him place nails in every piece so the electromagnetic head can “pick” the pieces and move them.

When it comes to chess software, the Reversed Algebraic Notation or what is popularly called as chess notation was indispensable. The G-Code allows the player to key in the starting point and the next location so the electromagnetic head will act accordingly. Despite the little time on his hands, the result was quite astonishing and satisfying. Even more fulfilling is the fact that the chess-playing robot came about because of the help from friends in Makerspace.

As good and cool as the robot is, Graham plans on introducing several more changes to fine tune the performance and looks of the 3D printer. Two of his priorities are to smoothen the movements of the robot when moving the pieces and using a software that can monitor all the pieces and their movements. Finally, the ability to be connected to a wireless device that allows the robot to move the pieces would be a really cool feature.