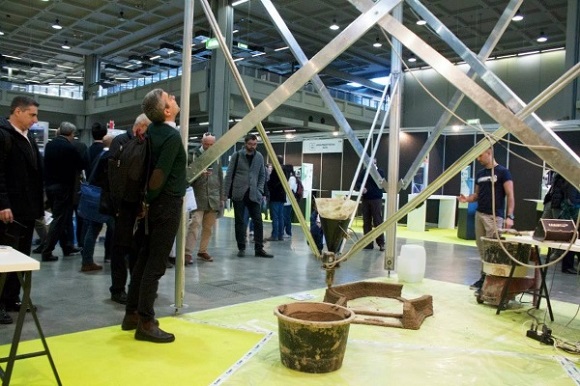 WASP team (‘World’s Advanced Saving Project’) from Italy has been working on the development of 3D printers and carrying out research in materials and clay printers for more than two years. The environmentally friendly “potter wasp” project, which makes their own houses with natural materials like soil and clay, inspired the WASP team with Massimo Moretti and its head, to develop a huge low-cost 3D printer, which could help “print” houses using natural materials.

They introduced their new 3D printer during 3D Print Hub Milan, which was taken place on March, 5-7 in Milan, Italy. Massimo Moretti together with his team focused mainly on one feature: creating 3D printed houses relatively cheap especially in developing areas. The company is now at the turning point – that was the first time they had exhibited at 3D Print Hub in Milan and represented a completely new, redesigned type of extruder – a rotating extruder. That’s a kind of revolution in this field.

As WASP described, such an extruder utilizes very small amount of energy and can clean itself. It will take you little time to piece the extruder together and to disassemble it. And additionally it has constant speed control. This new rotating extruder can also be used with larger 3D printers, like the company’s twelve-meter-tall delta 3D printer, which is now being developed.

Together with the rotating extruder, the WASP team also introduced in Milan the WASP Delta 20 40 Turbo 3D printer.

New to 3D Printing? Check out our 3D Printing basics section, find the answer on popular question what is 3d printinga or what types of 3d printers exist, and learn about many other interesting things.

US Army invests in 3D bioprinting technologies for skin repair and organ reconstruction
3D printing food pilot is about to appear in Dutch supermarket chain
An artist from Japan 3D prints Fujin and Raijin Kabuto
3D Printing With Noah: Print From Anywhere