3D Food Printing Could Become The Future Of Food

3D Food Printing Could Become The Future Of Food 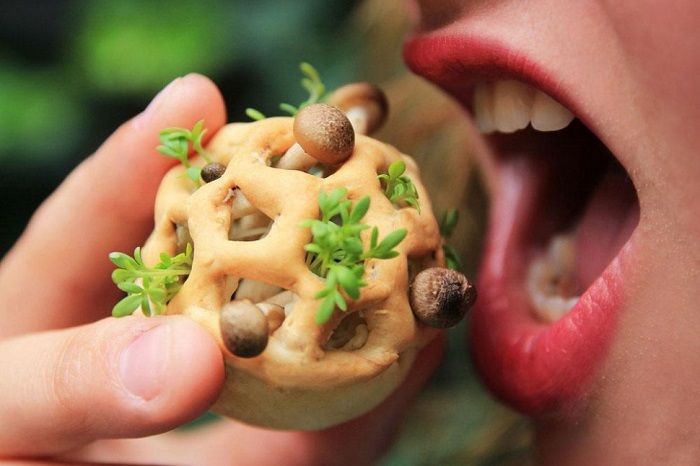 In the year of 2015 3D printing is becoming more and more accessible for the public. Companies and individuals are 3D printing various kinds of things, even food. You probably remember all the smart machines in sci-fi films that can cook and serve food on command. This might soon become real. 3D food printing might change the way food is produced. It will revolutionize culinary creativity, quality of food and nutritional value. However there are still market and technical obstacles that delay this moment. 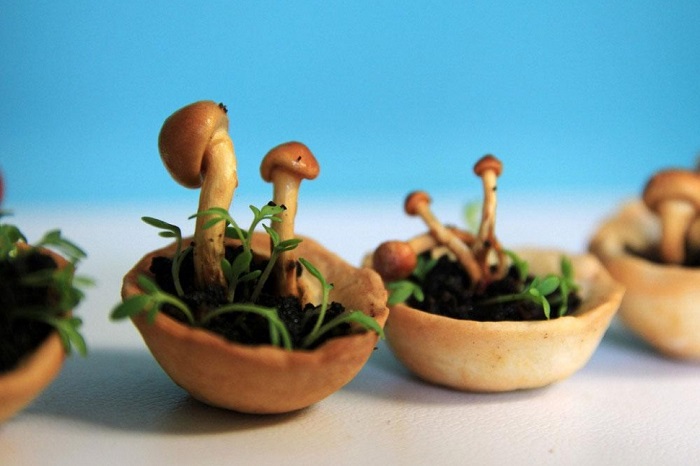 3D food printers are yet more complicated. During the Inside 3D Printing conference in New York in 2015 director of Cornell University Creative Machines Lab named three major methods of how to 3D print food. These are powdery material, lasers and nozzles. Some systems match and combine these techniques. The 3D systems ChefJet makes, for instance, various geometric configurations of thin layers of sugar, whereas with Choc Edge by Natural Foods one can produce beautiful patterns from chocolate. With the Foodini you lead fresh ingredients into stainless steel capsules and prepare a wide range of meals. Note that the new model can make only raw pizza, brownies and some types of dough which should be cooked in a usual way. 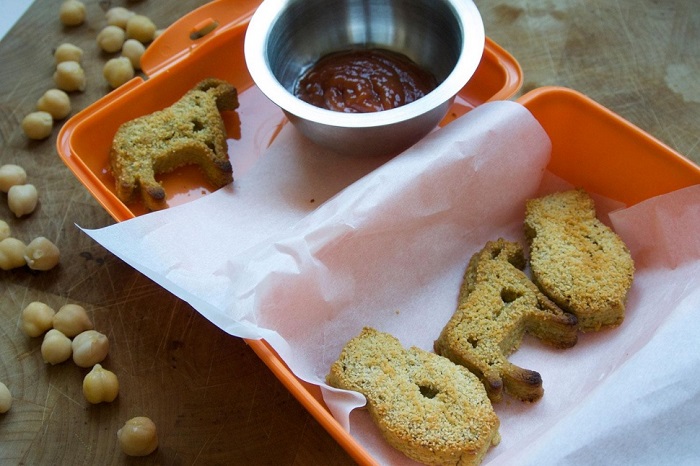 None of the printers will be the best for the Bocuse d’Or chef competition. The co-founder of Foodini maker Natural Machines Emilio Sepulveda announced that food-making machines like those from sci-fi films are still long way from now. But this will not stop scientists. In some nursing houses in Germany 3D printed food products called Smoothfoods are served to senior residents with difficulties in chewing. Purees are considered good alternatives in such cases, but they are not really appetizing, which might lead to malnutrition. Smoothfoods are much tastier, they are made of peas, broccoli and carrots solidified with special edible glue in 3D printers. Now nearly a thousand facilities in the Netherlands serve them on a regular basis. 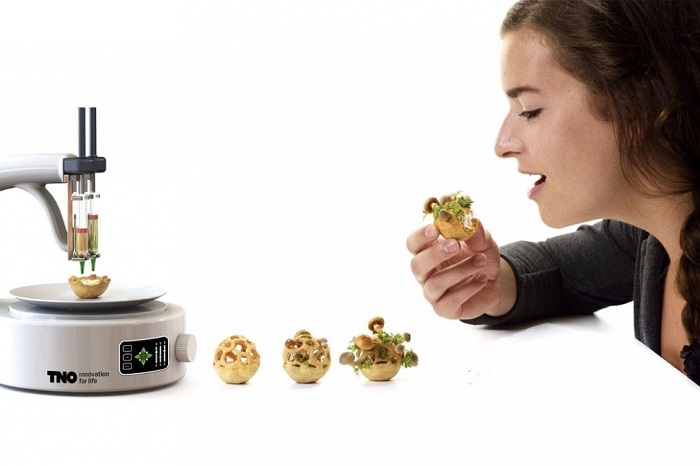 3D food printers are invading the culinary world. The Culinary Institute of America (CIA) revealed during the Consumer Electronics Show in Las Vegas that they had partnered with 3D Systems, the ChefJet producer. The Institute is planning to start testing the ChefJet and the company will give students the ability of internship in Los Angeles, the company’s headquarters.

The dean of Baking and Pastry Arts, CIA, Tom Vacarro told that with those printers they can do such a lot of various things. They design them on the screen and get them printed. It saves a lot of time. 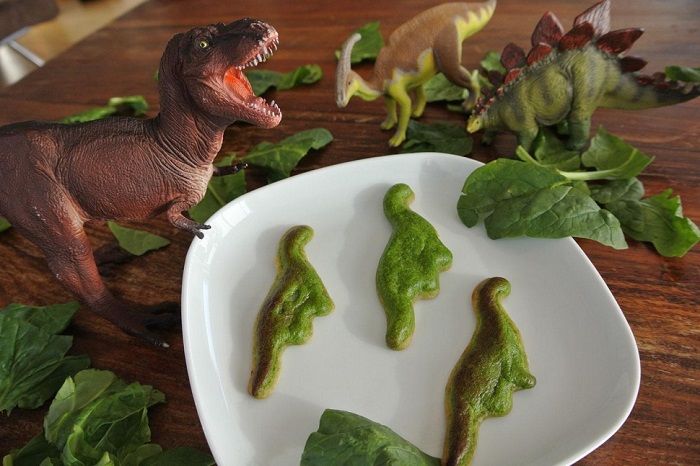 According to Liz von Hasseln, the Creative Director of 3D Systems, 3D food printing is likely to be part of culinary production. She also pointed that 3D food printing is influencing the culture of eating and eating habits, which is an important part of being a person. Her team are now experimenting with sugar and chocolate for wedding cake toppers and cocktail ornaments, but this is only the beginning. But these are unique things that no chef could ever produce. That’s a new kind of food design.

Some chefs go even further. Food designer for the Netherlands Chloé Rutzerveld tried creating yeast structures that resemble cracker with seeds and spores. As time goes by, they produce buds! According to Chloe, such snacks and others like that (natural products printed in a proper way) will revolutionize the food industry some time! The food systems used nowadays can’t give enough food for 12 billion people. Designers like Chloe feel they have to change our understanding of food. 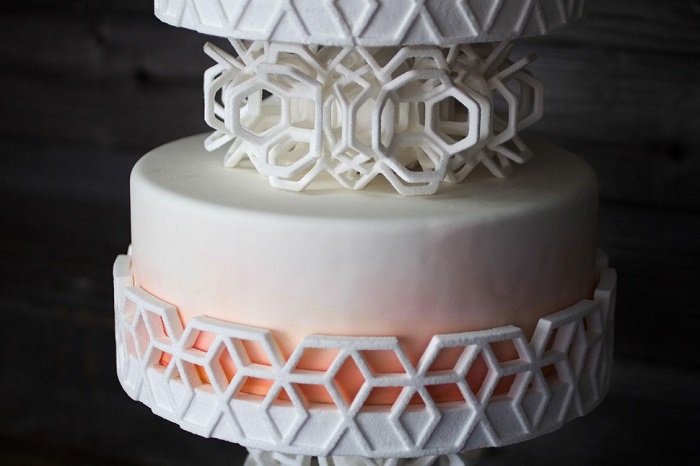 Experts suggest that using 3D food printers might reduce waste as they use hydrocolloid cartridges – substances that make gels with water. They suppose that such machines could use multiple ingredients like duckweed, grass or algae as the basis of some commonly known dishes. Van Bommel headed a study, during which scientists combined a shortbread cookie recipe and milled mealworm. In the shape of a cookie, said Van Bommel, the mealworm was good.

When it concerns food, people turn out to be very conservative. Some may admire only the food they’ve tried before. 3D printers can make the food that doesn’t look appetizing more attractive. It is like when there is something that you would not love to try when it is raw, but which is a rich source of protein is. Here comes the advantage of 3D food printing. 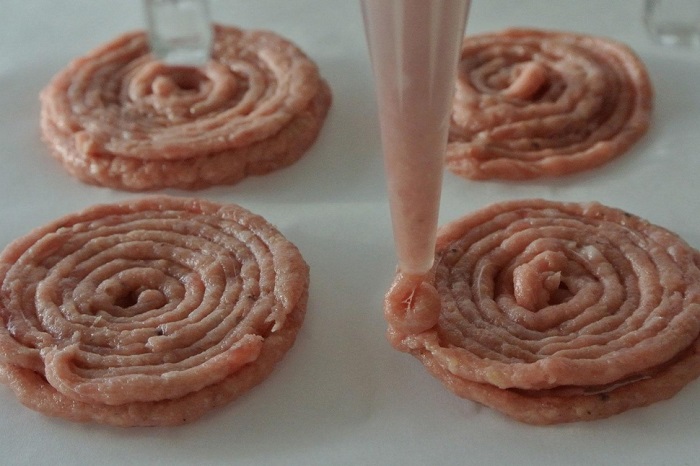 Anajan Contract is an engineer who is working to develop a pizza-making printer. He got a $125,000 grant from Small Business Innovation Program by NASA. He imagines a machine that can make food from capsules with powders and oils with use-by date up to thirty years. This printer can not only be environmentally friendly, but it can also be a source renewable food for the growing population of the world. Many economists agree that nowadays there are not enough food systems for the whole population.

Apart from being a source of renewable food, 3D food printing can also be a way for people to reduce the amount of chemicals consumed. In the future 3D food printers will even customize the food, for instance to individualize the amount of proteins in their food. 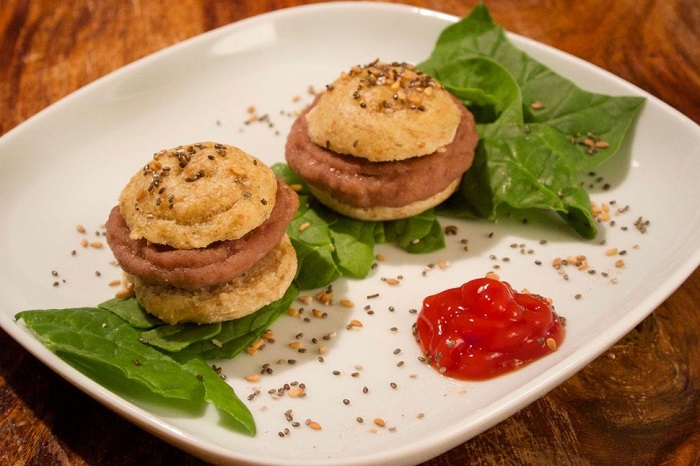 However there are still many difficulties for the technology to overcome, and first of all it’s speed. Some 3D printers can work really fast, but that’s not the case of 3D food printers. Some layers need to be cooled, so it takes a long time to wait.

Many food 3D printers can make food from sugar chocolate and dough, but products like fish or meat are really complicated. Printing food is challenging from the engineering point of view. We’re not saying it’s impossible. We just say that it’s hard to achieve the necessary flavor and texture. And even if scientists do manage to achieve it, not all the consumers would love to try 3D printed meat. 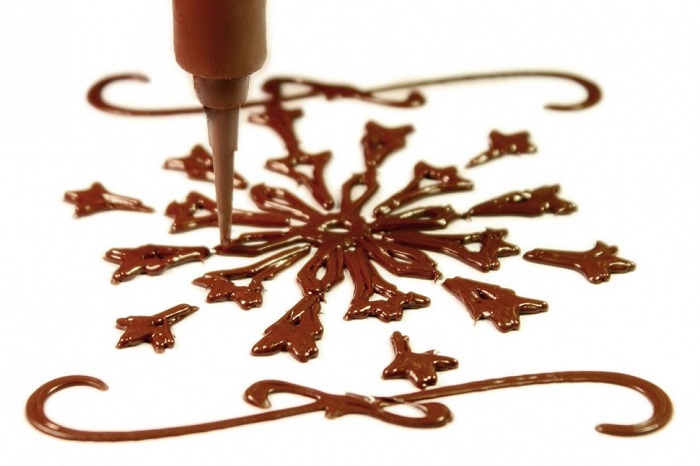 Another point concerns the use of cartridges. It might seem easy to print a tomato, for instance, but in fact you will have to use millions of cartridges with ingredients. Or you may think: “I need a fat cartridge”, but there are lots of kinds of fat.

3D food printing is a new technology and people have to get used to it. Some suggest that food and 3D printing can’t exist together. 3D printers can’t produce delicious food at present, but they are getting better all the time. Who knows, maybe in 20-30 years out perception of meals and food industry will change.