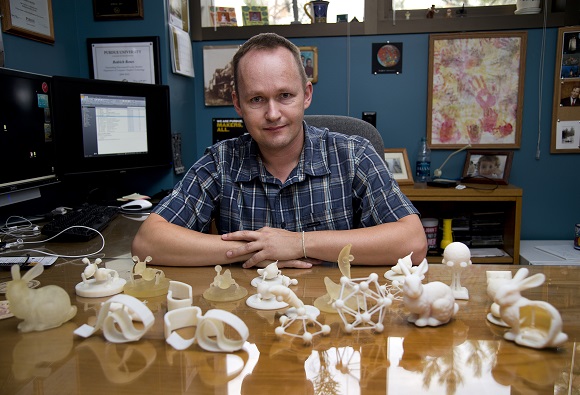 The principle of 3D printing is developing objects layer-by-layer bottom-up, but there is some difficulty in printing extended details of a figure like stretched arms. To create them one needs supportive structures that will be removed afterwards, which requires extra material and time.

These days scientists from Purdue University have introduced two techniques that allow lessen time and materials considerably required to produce items with 3D printing technology. Such advancements are expected to lead to lower total printing costs. The total printing costs are influenced by a number of facts, among which we can name the price of a 3D printer, the total amounts of time and material required to develop the shape, said Bedrich Benes, a Purdue associate professor of computer graphics.

A 3D object was divided into several segments of similar size that can be easily assembled after printing. Thanks to this approach the overall printing time was reduced from 13.5 hours to 9.5 (saving 30%) and 3d printed material amount was reduced from 351 g to 229 g (saving 34%). The optimization took about 1 minutes and the final object assembly took about 15 minutes.

The first technique is known as the PackMerger algorithm. Its principle is to print projects part by part. Later the parts can be glued together. For instance before printing a replica of the Gateway Arch it was cut into a number of segments beforehand. These small segments fit the printing tray. The technique is based on the same principle as the Tetris game – the elements are packed in the smallest space to create an area without gaps. As the segments are placed together as closely as possible, very little supporting material is required thus saving material and time. The parts (or segments) can later be detached and brought together. Sometimes it’s possible to create parts placed within each other so as to save space. The research paper detailing the PackMerger algorithms can be found here here.

Some students have also worked out another technique, the result of which would be the use of small hold-up structures that lessen on average printing time by 30 per cent and the amount of material used by 40 per cent. Before printing an item the algorithm directs how to orient it in the printer tray so as to minimize the overall area that needs support. The object is rotated automatically before being printed. It is located in such an orientation that it occupies the least space possible. The hold-up constructions are created at some specific points of the area, which result in a scaffold-like construction that holds up overhangs.

The algorithm is founded on the geometry-based method, which doesn’t take into consideration any physical or structural properties when affecting how to lessen hold-up elements. The greatest benefit of the technique based on geometry is that it saves money, printing material and time. 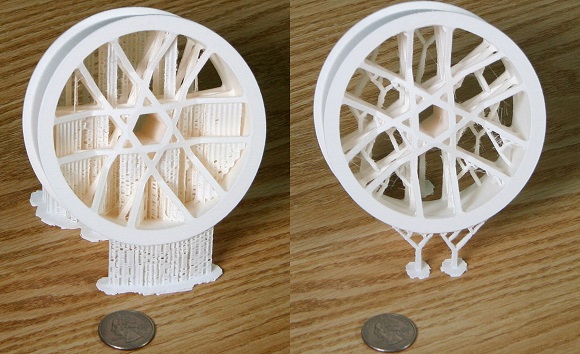 New software algorithms reduce the time and material needed to produce objects with 3D printers. Here, the wheel on the left was produced with conventional software and the one on the right with the new algorithms. (All pictures credits: Purdue University/Bedrich Benes)