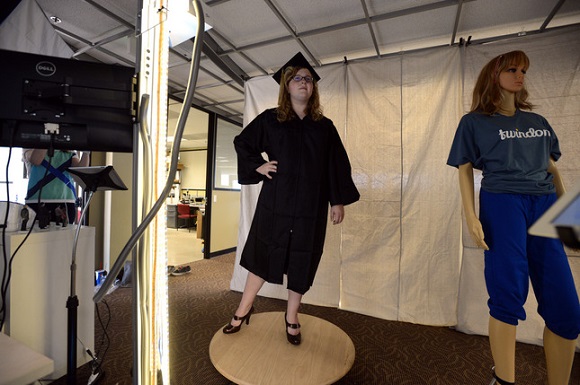 In the picture there is Elizabeth Izatt, an electrical engineering and computer science major who is to graduate from the University of California soon, slowly turning on a gyrating platform. She is scanned in 3D at the office of Twindom in Berkeley, California on May 1, 2014. Scans are used for creating 3D tiny statuettes of the subject.

Just a few moments – and your graduation day is over. However if you have just a little time and pay $39 you will get a 3D printed statuette of your graduating self in a gown and a cap fir good. You needn’t limit your memoirs just with a photo in a frame, you can have a look at yourself from any side you like. Their slogan says that by holding yourself you can hold your memories closer. If you want to be megalomaniacal, just get your mini-copy and love it! 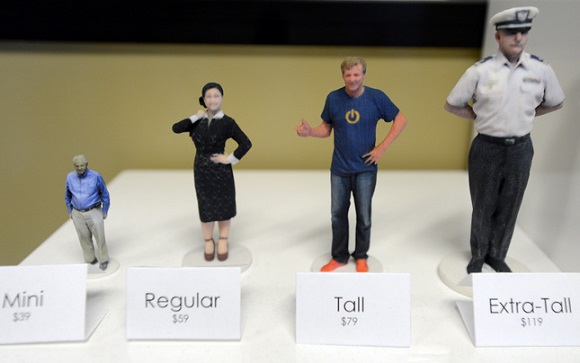 The Twindom Company have started producing realistic figures with 3D scanning and printing. Their studio is a curtained corner in some startup room in downtown Berkeley. Among their products you can see a small woman with a smaller dog, a pretty couple and the founders themselves. The whole range of statuettes could be viewed at Twindom’s office in Berkeley, California on May 1, 2014. The company founders Richard Berwick, David Pastewka and Will Drevno look to commemorating about 500 Californian graduates this year, together with those who are likely to stop in on their way to Saturday’s graduation ceremony.

The three enterprisers themselves walked the stage not so long ago. It all happened in 2012 when they achieved their business degrees. Drevno attained his bachelor’s degree in industrial engineering and operations research only last year. They met during a mobile application invention contest in California and before graduation they established another company named Dreambox, aimed at creating 3D vending machines. Last autumn they decided to start 3D printing people with depth-sensing cameras, 3D printers and the required software instead of wasting time with motion sensors for video games. 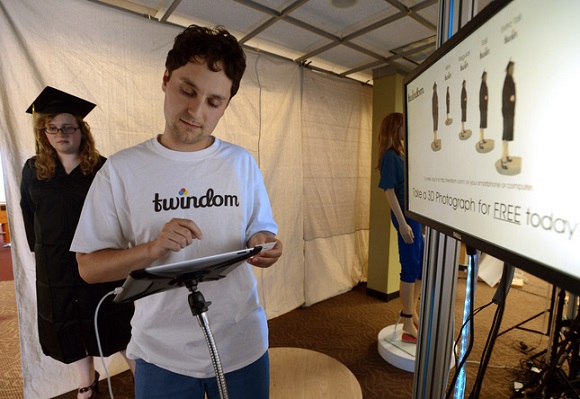 Twindom co-founder and CTO Richard Berwick processes an order for Elizabeth Izatt, an electrical engineering and computer science major who will be graduating soon from the University of California

When Elizabeth was getting tired of being scanned, the voice warned that after one more rotation she would be able to relax the face. The sensors were to catch every detail of her clothes, face, hair and all of her appearance. In some minutes she was shown the preview of the scan — a small version of herself turning around slowly on the computer screen.

It all cost her about $119 to get a small 3d printed replica of herself and her parents coming their way from North Carolina. The sizes of the statuettes was “extra-tall’, which is 8 inch each. She got the figure in a week by mail. Twindom are going to establish their workshops all over the country that will offer an up-to-date version of the popular photo booths. They are also going to try animating their scans. They are even eager to scan not only university, but also school graduates. Their goal is to help everybody remember the graduation day for the rest of their lives!