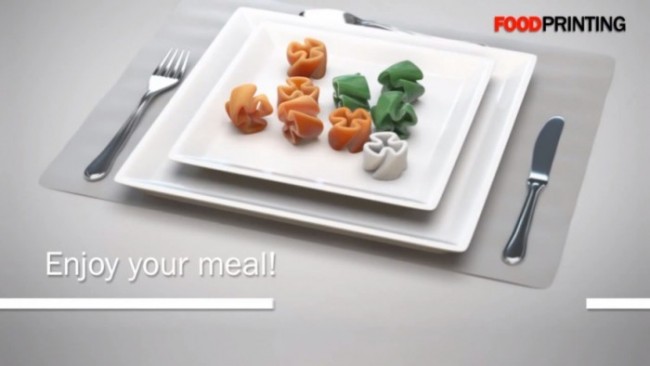 Anjan Contractor and his company Systems and Materials Research Corporation have been awarded a grant from NASA to create a food synthesizer like the one you may have seen in Star Trek. However the one invented by Contractor is more worldly. He’s looking forward to the day when there’s a 3D printer in every kitchen and people eat food synthesized layer by layer. He also expects the necessary “ingredients” – synthetic powder and oils – to be bought in the nearby shop. This view of the future means the reduction of food waste, for the cartridges and their constituents will be shelf stable for as long as 30 years!  If eating something produced by the same 3D printer as you use to print other stuff like engine parts doesn’t sound good to you, never mind, you’ll get used to it. It might become popular and usual by the end of the century. What’s more, current food system is not enough to supple 12 billion people. 3D food printing might change the situation.

Initially Contractor got his grant from NASA to create a system that would produce food for astronauts during their long missions. If we take all the way to Mars, which would take 15 shelf life years or more, 3D printed food could solve nutrition problem, for the powder contains all the necessary micro and macro elements.

Pizza is considered as one of the possible candidates for 3D printing. They are about to start building pizza printer in a couple of weeks. When they get it, it will start making pizza by printing the pastry layer, then a tomato layer, finally – the protein layer. All this will be baked at the same time when printed. A prototype of a pizza printer is chocolate printer, which helped Contractor win a NASA grant.

With a 3D food printer you will need no cookbooks. While a 3d food printer is hardware, you will get recipes directly as software. Each recipe is a kind of instructions for printer which cartridge to use and what to mix. This will be like an app store but for recipes. All the recipes will be open source so that everyone can find something to their liking. A 3D printer is personalized. You may program whatever you need – whether you keep to a diet or are sick – and it will print exactly what you need.

Apart from using 3D food printer in space travels, Contractor and his team aim at turning his 3d food printer system into design that everyone can turn into business. Their company has already been successful in this; they’ve created an appliance which uses microwaves to estimate the structural solidity of airplane panels.

Nevertheless the 3D food printer is not even a prototype yet. It’s too early to speak about its price or benefit. We hope the food will be more yummy!