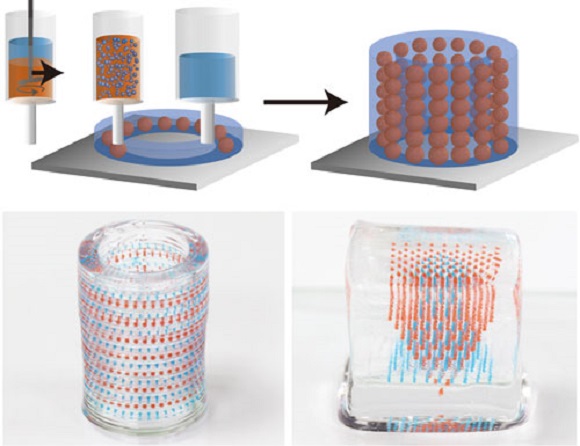 The number of 3D printing coming with nanotechnology applications is increasing. We have recently seen 3D printed smart glue leverages DNA assembly at macroscale, Fully 3D printed quantum dot LEDs, and 3D printed graphene for biometrical and electronic applications. In this respect researchers are spreading their fabrication technique into more spheres. A good example is the representation of an up-to-date method based on 3D printing to develop extremely monodisperse core/shell capsules which one can load with biomolecules, like therapeutic drug.

Associate professor in mechanical engineering from Minnesota University Michael McAlpine told that this method is a good way to control the properties of the particles and their distribution over the 3D matrix. They also make the capsules able to respond to reaction by applying gold nanorods into polymer shell, which allows more selective photothermal breaks and activated temporal release of biomolecular payload.

McAlpine and his team work with scientists from Washington University of St Louis. Together they published their discoveries in the online edition of Nano Letters on June, 4, 2015 (“3D printed Programmable Release Capsules). This paper deals with the usage of 3D printing in order to place biomolecules, polymers and nanomaterials in a hierarchical order to make up functional materials in a scalable way.

Maneesh K. Gupta, a research scientist from Air Force Laboratories (who used to be one of the McAlpine’s group members), explained that the technique has become possible through the 3D printing of repeated ranges of capsules loaded with biomolecules and with orthogonal and tunable laser-triggered rupture and release of active biomolecules. You may imagine how to fill capsules with molecules (like nuclear acids, cell markers, drugs, enzymes, growth factors and other functional proteins) into a hydrogel environment.

Postdoc scientist from McAlpines Lab and the first co-author with Gupta Fanben Meng added that among the benefits of their 3D printing method there are especially monodisperse capsules, effective placement of biomolecular payloads, accurate spatial modeling of capsule ranges, in-motion programmable reconfiguration of slopes and inconstancy for including in hierarchical architectures.

A peculiar detail of those capsules is the ability to control temporal and spatial emission of the payloads. This can be done by placing gold nanorods in the shell. The size of the nanorods determines the use of the special wavelengths, with which the rods can be warmed and rupture the shell. This 3D printing method also allows for accurate control over the capsule sizes and architectures.

Scientists hope that their platform for 3D printed programmable emission capsules will do good to applications like dynamic tissue engineering, 3D printed medicine delivery systems, synthetic tissue, programmable substance and bionic nanosystems. Apart from this another sufficient area of usage can be combinatorial screening of biomolecular gradients (toxins, drugs, pollutants and others) against various types of cells. A very far-reaching and vivid example is to visualize having several stem cells that are generated into a heart with a red laser or into a liver with a green one.

The inspiration came from the fact that living systems make effective use of control of biomolecular gradients to control cells and thus to enable composite tissues. They hope that reproducing this control is essential for possible bioengineering advances. Previously they have done extensive work to use microfluidics, particle encapsulation and materials capable of reacting to stimuli to deal with challenges. Their results open up future perspectives as they offer approach based on 3D printing to tackle these challenges. 3D printing offers more precise control of volumes, spatial distributions and the range of materials including biomolecules and nanomaterials.

The next stage of the research demands studying the practicability and biocompatibility of using these 3D printed capsules to govern cell fate on different levels from separate cells to tissue engineering. The team notices that apart from biological research, they have to do a great amount of work to improve properties of materials and functional characteristics of capsules. For instance developing spatial alignment and resolution of the capsules, producing shells that respond to stimuli and creating other ways to stimulate capsules, like making use of electrical signals instead of light triggering.