One of the most wanted dreams of nanotechnology scientists is the designing system that builds itself. There are a lot of attempts being made to develop such nanotechnology fabrication approaches. The majority of the biological objects are produced from the bottom-up – a technique in which the object is created in a particular order, so that it appears according to a particular design. But up until the present this approach wasn’t applied very often in technology. 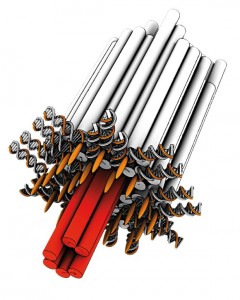 Molecular structure has been prominently described in popular sci-fi literature. Contrary to that, the recent examples of bottom-up approaches represent a specific chemical process that is useful for a particular job, but can’t generalized for developing more composite structures. The construction process is based on DNA and it may change the following: DNA origami (small forms and templates self-organized from DNA) have been announced a future breakthrough for producing nanoscale tools. DNA origami is the way to fold long DNA strands into any small form or template that you like. With the special computer design program a researcher can develop any nano-scale form he wishes, and the computer will design a chain of short DNA strands. Using a computer-aided design program a scientist can design the desired nanoscale shape and the computer designs a set of short DNA strands. They will get mixed with the longer DNA strands, warmed up to almost boiling and then it will take a couple of hours to cool it to normal temperature. In one tiny water drop there is almost 100 billion copies of the necessary shape or a shape with a sample on top.

In the first DNA origami created was like smiley faces or triangles in shape, and samples were like snowflakes, maps of the western hemisphere and the like. An interesting fact about DNA origami is that it helps scientists create such nanoscale forms and samples by complete self-assembly. As accidental arrangements aren’t especially useful, such samples and patterns should become meaningful constructions, for instance, to produce synthetic membrane channels or wire up electronic circuits.

Such innovative achievements are just at the nanoscale, and scientists are beginning to benefit from the power of DNA self-assembly to a larger degree. The Ellington Lab at Texas University, Austin, is suggesting new work, which is currently demonstrating that scientists can really produce a microscopic object supported by DNA interactions only. As the current Assistant Professor from the University of Idaho Pater Allen says, they have worked out the ways to manufacture a colloidal gel from DNA-functionalized tiny parts, and to extrude the gel through a 3D printer at the centimeter-sized scales.

The paper called “3D Printing with Nucleic Acid Adhesives” – whose first author is Peter Allen and which was published in ACS Biomaterials Science and Engineering – explains that the materials produced with the new technique can have some unique properties. First, in contrast to the conventionally 3D printed objects, the produced semisolids are made up of DNA only. The interactions within the DNA are strong enough to hold the object at the macroscale.

Secondly, the objects possess internal microscale properties and they are specified by the nanoscale DNA communication. To control the change of the constructions into the macroscale, the scientists realized one of the challenges in constructing materials. .

Thirdly, the objects are so large (some of them are up to centimeters) and the price of the materials is moderate, as relatively cheap polymer makes up the great part of the volume.

And the last one – the material is collected under the conditions which are suitable for cells to survive and grow. The material can be sown with cells when extrusion takes place, and the cells will multiply all over the colloidal gel matrix.

Allen stresses that the ability to use molecular intelligence together with the substrate which makes a microscopic object, is a real breakthrough in developing preprogrammed materials.

It is described in the paper how the colloidal gels are programmed at three various scales. 1 – at the nanometer scale – special DNA interconnections rule the separate interactions between microparticles. 2- at the micrometer scale when microparticle bundles make up DNA dependent constructions. This kind of topology can be then controlled with oligonucleotide derivatized microparticles of various stoichiometries and sized. 3 – the form of the object can be chosen at the centimeter scale by 3D printing and the material property like porosity can be changed if you control the contents of the colloidal mixtures.

Allen explains that such 3D printed preprogrammed materials provide numerous opportunities for synthetic biology. The total result published in their paper had to manufacture the gel out of hydrogel fragments. That helped them a lot, as the hydrogel fragments are transparent. Its fragments can be produced with new useful properties. Allen’s original goal for the latest research was to come up with the new kinds of fragments that can be united as a self-manufactured material. Imagine that cells within the bioprinted tissue require an exclusive microenvironment. Producing such a microenvironment in the way that scales to the required volume is challenging. Te technology like DNA adhesives may let some part of the microenvironment to self-manufacture, instead of being sculpted into another material. 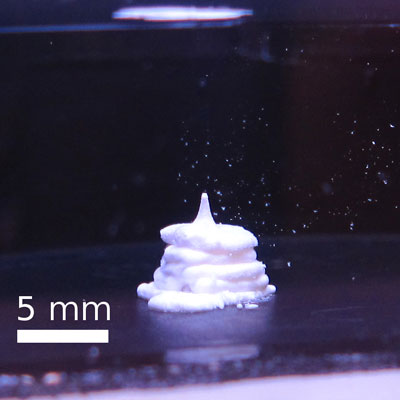 DNA control will let some specific constructions appear, and as hydrogel is relatively cheap, it will reduce the total price. Every day they get more knowledge in programming DNA, so maybe their ‘circuits’ are likely to become a real biological breakthrough.