For years luxurious watchmaker Omega has been the only timepiece producer that managed to get a certificate from NASA to use them on moon walks. Now it has got a 3D-printed rival, which is competing to be chosen to be used by space explorers. Only after severe stringent tests was the SpeedMaster selected as the most appropriate for Apollo astronauts and their missions. Those tests included heating to extreme temperatures (up to 200 degrees Fahrenheit) and immediately freezing and also exposing to humidity and pressure. The SpeedMaster is likely to be suitable for moon conditions, but may be unable to deal with conditions on Venus, as temperatures there may reach even 860 degrees, there may happen occasional sprinkles of sulfuric acid and the pressure is squashing.

It has been more than 50 years after the first expedition to Venus. Now the two designers from the Royal College of Art, London, have sketched the prototype watch that is likely to meet the demands of the space expeditions of the future. They’ve also shown the way for the new technologies to influence the world of art. 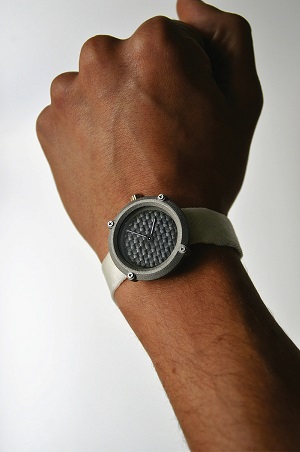 Tibor Balint and Julian Melchiorri from the RCA’s Innovation Design Engineering (IDE) department have put forward a prototype of the Venus Concept Watch 1.0 that possesses a 3D-printed body made of titanium, sapphire crystal glass, the watchband with nylon parachute ribbon and a laser cut 2D woven carbon fiber sheet for the face.  Balint and Melchiorri used a 3D printer to create the composite and at the same time delicate and thin internal structures. As a result what they got is the design that reflects the needs of the past, present and future space expeditions. They also intended to 3D print carbon fiber panels, but they turned out to be too thick to use them on the watch face.

The new watch has the properties that allow resist the pressure of up to 100 bar, which is appropriate to the conditions that are typical of Saturn, Jupiter or Venus. However the prototype still can’t deal with the temperatures typical of Venus, because none of the materials that are widely used in productions could survive. With 3D printing they could probably find the way out as the titanium body could have special channels for the small cooling system. The designers published all their suggestions in the Acta Astronautica journal. They also wanted to point in their project that while we meet extreme conditions in various places of the Universe, we can find solutions and create appropriate technologies to deal with them. The Venus Watch is still a concept. The designers are doing their best to develop the idea and to make it a widely available product. The design is suitable not only for astronauts, but also for deep sea divers, who also face severe conditions. And don’t forget about all those gadget freaks, who will strive to get this device.

The second version of the watch is still being developed, it’s only at sketch stage. The designers are going to expose it to severe tests. The most desirable way to do that is to haul it down to 1-2 kilometer passage near Hawaii, where the temperatures can reach 662 Fahrenheit (350 degrees Centigrade).