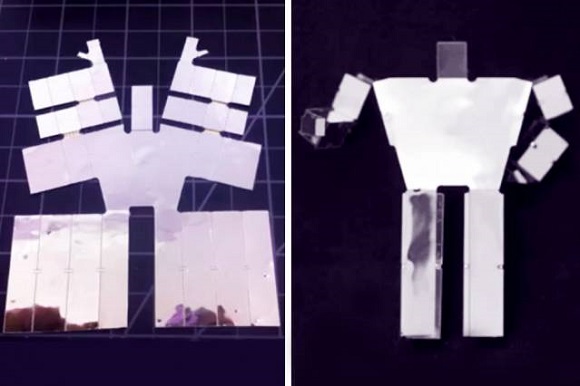 MIT scientists were encouraged by origami art, consisting in folding paper, and created 3D printable robots with new algorithms and electronic components that can congregate when they are heated. During IEEE International Conference on Robotics and Automation in Hong Kong this year Daniela Rus – electrical engineering and computer science professor and Computer Science and Artificial Intelligence Laboratory (CSAIL) director at MIT, presented a genuine concept of 3D printable robots, named as Bakeable robots. Her team managed to construct 3D printable parts of robots that automatically wrap into 3D configurations when heated.

The scientists can describe how to construct electrical constituents from self-wrapping laser-cut components and they also display designs and patterns of inductors, resistors, condensers, actuators and sensors, which determine and allow robot’s movements. They say their dream is to get hardware compiler that could produce a working device just as soon as you name it. By the present moment they have dealt with some minor difficulties in the space, one of which is the end-to-end system. Imagine that you have a picture and the object that realizes the picture is at another end.

Shuhei Miyashita, one of the team members, explained that in their new project they use a technique for accurately checking and restraining the angles at which a heated sheet wraps. By inserting a sheet of polyvinyl chloride (PVC) between two films of a hard unbending polyester covered with slits of different sizes, the PVC shrinks when it gets hotter and the slits close. At the points where polyester film margins press on each other, they damage the PVC. But what if a slit in the upper film is smaller than the one in the lower? The PVC will get narrower, the top slit margins will press on one another, but there will still be some space between the lower slit margins. The whole sheet will curve downwards and the lower margins will meet. The last point is the option of difference between the upper and lower slits width. This slits pattern production is not the same as origami crease pattern, it’s far more difficult. You need to control everything that moves in the system at the same moment.

Scientists also mention in their research that they used polyester covered with aluminum, which helped them produce foldable electronics. Miyashita created those constituents by hand, as it was important to prescribe their geometric properties as well as electrical properties. Her sensor resembles a small accordion. Its every fold possesses a separate resistor. The whole resistance changes proportionally as the folds compress. The actuator will make the robot move. It is a foldable convolution that must be supplied with a couple of iron cylinders. The electrical current would magnetize them. Aluminum is known to be not an efficient conductor, whereas a copper-coated polyester could do well.