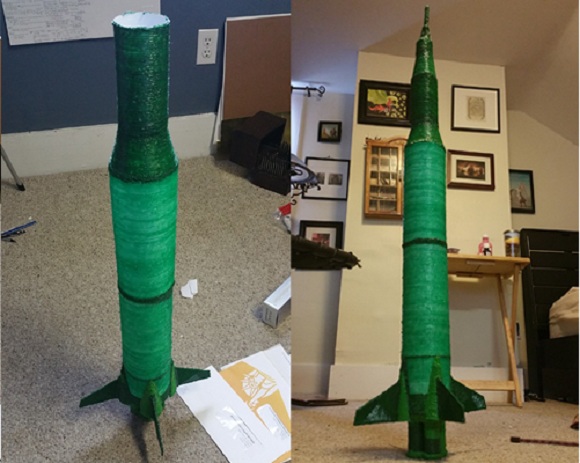 It was a great show when Pete Dilworth – the creator of the first 3D printing pen 3Doodler – started the second generation of 3Doodler. The start had a literal direction – skyward – with a well functioning model rocket produced with 3Doodler 2.0. When you use 3Doodler, you may 3D print either with ABS or PLA filament, which are to be loaded into the end of the tool. The tool itself looks like something between a soldering iron and a large fountain pen. You can pre-program it so that it can operate at different speeds.

The speed depends on what you’re going to print. In addition there is also a foot control for you to pay more attention to the accurate guidance of the tool and not to look after the filament. This tool is really nice, and is going to become one of  the most popular tools and applications for those who want to get only a slight idea on how 3D printing works.

3Doodler rocket was developed on the basis of the Apollo rocket, but it is a smaller, home version, which was unexpectedly easy to develop.  Dilworth started with making tubes from white printer paper which was abound about with green filament by 3Doodler, so that hollow tubes of various sizes for the rocket could be created. Dilworth needed to create cone shapes, so he found an ordinary cone template on the Internet and 3Doodled away till he created the necessary parts of the rocket. Eventually he managed to install the four C-model rocket engines.

The whole 3Doodlig part took almost 15 hours to be produced. Dilworth spent four or five hours every day doing the 3D printing part. The ready rocket is almost 40” tall and about 3 ½” in diameter. He needed eight packets of PLA filament to produce the mini-Apollo. The rocket’s weight is a bit less than 1 lb. The last step was to add “3Doodler” to the rocket in blue PLA. 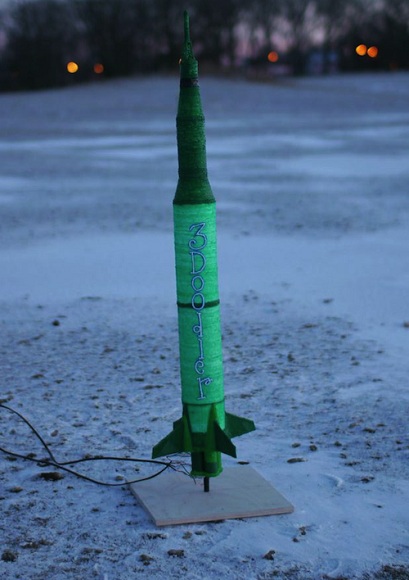 Dilworth was excited about the launch and said that it was surprisingly successful. The top height that the rocket reached was 500 feet or 150 meters. In spite of being successful, there was some minor damage to the rocket. So it will be launched again with the new engines installed, which won’t be pleasing to the geese, which were slightly traumatized by the noise.

Dilworth didn’t have for one thing only when producing the first rocket – including a parachute system that would make the returning on the Earth not so destructive. He noted that surprisingly the biggest challenge with constructing the rocket was to make sure that the paper tubes remained round in shape.

Dilworth said that he doodled the rings around them so that they could keep the round shape of the paper tubes. In fact it’s a funny thing that he managed to launch the rocket easily, and the most difficult part was to keep the round shape of the tubes. But the more he works with 3Doodler, the more solutions he finds. Dilworth hopes that having created the ingenious 3Doodler he will be able to work out the principles of the less intricate rockets.