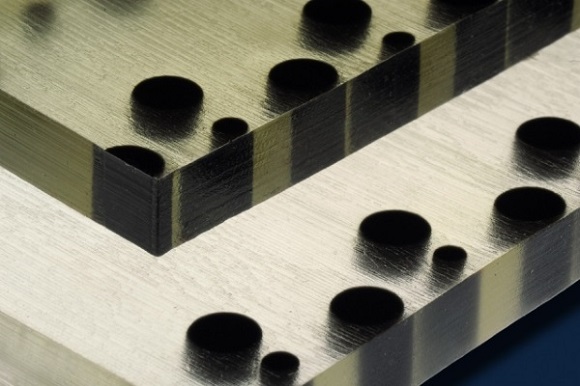 If you’re interested in the future development of additive manufacturing and material science, you will find it important to learn that this year (2015) is going to become one of the most exciting ones – and we’re already halfway through. We have already witnessed that the process of creating materials has been improved and such space-ready tools as AstroABS filament by Made in Space have been created. Further research is being carried out into creating 3D printing materials that users can program, so that they assembled or disassembled separate parts of the structure after being created.

This time a MIT team has come up with the way of manufacturing soft materials whose surface can be changed according to the necessities to be ridged, smooth or bumpy. These textures could be beneficial in changing the aerodynamic resistance or object reflectivity when necessary.

The process is the result of precise computer simulations. It consists in developing the unique material that is made up of two separate polymer agents with various degrees of rigidity. The harder polymer is placed inside the softer layer of polymer. When the first layer is deformed, for instance, when squeezed, the next layer of the material (the harder one) will be revealed in any pattern or placing that was planned when designed and simulated. Computer simulations had been created to check the system before confirming them with 3D printed variants.

This animated simulation shows how embedded hard particles within a softer flexible material produce a textured surface when compressed. (Animation by Mark Guttag)

The scientists have recently revealed the results of their research in the Advanced Functional Materials journal. They say that this process might result in appearance of the new type of materials that will let develop controlled and changeable surface characteristics. The co-authors of the research are a former mechanical engineering professor from MIT Mary Boyce and a MIT graduate student Mark Guttag. Mary Boyce is at present the engineering dean at Columbia University.

If you wish you may have various surfaces – be there bumps of ridges all over the surface. It can be achieved with the same compression but you should arrange the particles in various ways.

The ability to distribute and arrange hard pieces to create very complex surfaces may have a far-reaching effect on almost everything from camouflage and medical implants to fluid systems and ship hulls, it depends on the application and its use. Other ways to apply the surfaces include the ability to influence the liquid flow just slightly changing the pressure that is exercised of the material surface. In addition the system is governed by geometry, that’s why the designs should be adjusted to different sizes, but they will still be governed by the same principle.

Previously there have been no other techniques which helped to achieve a similar degree of flexibility for achieving dynamic and tunable surfaces that can be changed. Professor from Northwestern University Yonggang Huang (who did not concern the research) explained that such a work is the first of its kind for developing materials with changeable structures of the cover. And the research has a huge practical potential. Many applications could benefit from such a change of surface – tribology (the science of interacting surfaces in movement), optics and others.