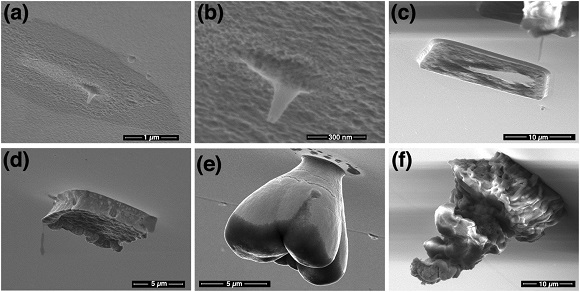 3D printing is represented in various printing techniques, sizes and shapes. Sometimes we understand and regret that the possibilities of the FDM printers are limited. But there are some industrial scientists and designers who are trying to find new levels of printing – microscopic, which will have a great many of potential medical, chemical and industrial applications. Luckily a team of scientists from South Korea, led by Seongpil Hwang from the Korea University in Seoul, has created quite a promising 3D printer – the HYPER pen. HYPER in this case stands for “hydrogel pen for electrochemical reaction”. It combines extreme precision of atomic force microscopy and a kind of diffusion 3D printing basing on microscope electrodes.

From the first sight the construction looks like a pen, but in fact it is a very intricate electrochemical appliance that is capable of depositing platinum on electrode surfaces at the smallest level via the electrodeposition concept – a reliable low-cost versatile environmentally friendly way to create thin films, the thickness of which is governed by a number of micrometers and a monolayer. As a rule it’s used for producing 2D constructions, but this pen has moved into 3D. You are welcome to check Seongpil Hwang’s recent paper that was published in the Nanoscale Journal. In other words, this HYPER pen is not in fact a pen as we all imagine it. Don’t even think of the usual concept of pen, as it’s not what you can take into your hand. And the innovation is all around the tip.

Just like a conventional pen the HYPER has a tip in a pyramid shape. But it’s made from hydrogel and it’s only on a microscopic level. The point is steeped in electrolyte, due to electrochemical reactions happen. When the tip contacts electrode surfaces (for example gold electrode), mass is carried from this tip to the surface because of a faradaic current, which rests on the small electroactive surface. You can use this to produce accurate nanostructures on condition that nanopositioning system controls the tip.

SEM images of platinum structures produced by the pen

The 3D structures are so miniature. According to the publication the HYPER pen can produce tall heights of almost 30 μm, the tiniest sizes up to 110 nm in diameter and arbitrary constructions, thus showing additive manufacturing in 3 dimensions by localized electrodeposition.

Professor Hwang told the reporters that this pen is the first sample of a 3D printing pen. But they gained a lot from the previous research groups. The pen is almost ready to be checked in practice, and the creators hope that the HYPER will become the crucial turning point in this direction. Future studies will help to improve the reliability, scale and control of such a kind of nano-3D printers. So some more research is necessary, but the team are even now sure that their technology can be applied to 3D print any kind of metallic construction on a microscopic level.

World’s first 3d printed skull implant was used in Netherlands
The F3D Printer can print not only pizza, but also cooks it in less than 20 minutes
Future: Soldiers may have their bones 3D printed and implanted in case of injury
Poland’s 3D Printing Education Gets another Massive Boost from Zortrax