The F3D Printer can print not only pizza, but also cooks it in less than 20 minutes

The F3D Printer can print not only pizza, but also cooks it in less than 20 minutes 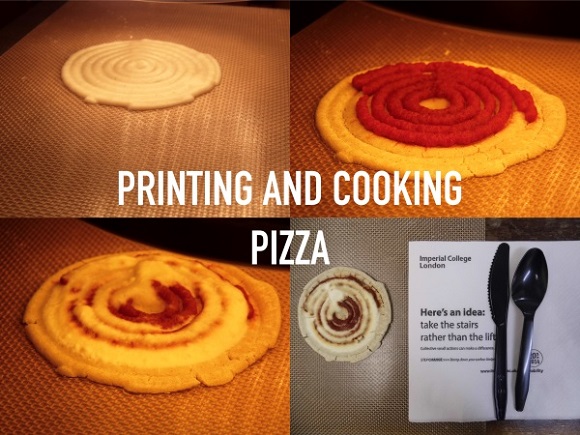 One of the world’s greatest challenges is the production of long-lasting edible food using 3D printing. Scientists have been occupied with this technology since the Star Trek epoch, when the first replicator was presented. Some outstanding steps have been taken, but still the phase of cooking and some ingredients are still difficult for engineers. And last but not least, 3D printed food should be tasty and recognizable to people in order to raise commercial interest. 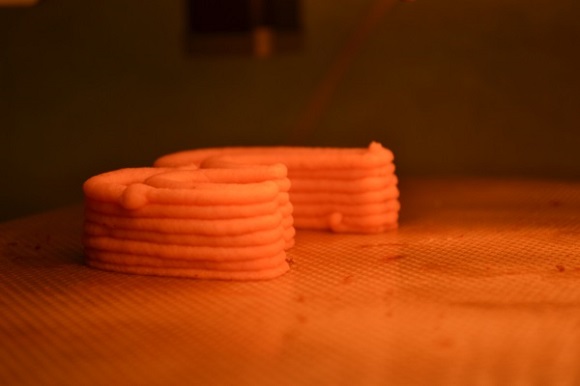 Four undergraduates from London have made a few steps to make this kitchen device closer to consumers. Jacob Watfa, James Clarke, Hillel Baderman and Francis Nwobu are mechanical engineering students at Imperial College London. They’ve used and modified the familiar 3D printing process to develop the F3D, which is pronounced like ‘fed’. That’s a 3D printer that can print tone of the most favorite dish of many people – pizza. According to photographs, this doesn’t mean the end of pizza industry. In fact this device can mix only 3 products to make a pizza – tomato puree, Masa Harina dough and cream cheese. It prints the constituents out of three extrusion points and cooks the pizza in 20 minutes. During one of the tests the students found out that it can print and bake its name on the cookies. The budget of this marvelous F3D printer was about $2000 (£1,200). 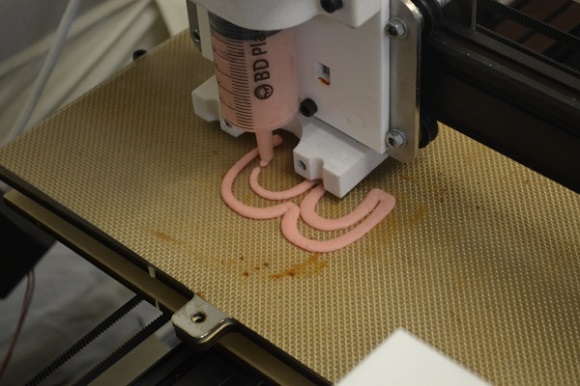 Easy though this dish may seem, that’s a great breakthrough in the area of food printing. The four scientists have published a detailed review of the cooking process online, and they suppose that some time later other companies begin using their technology. In their paper the students explain that they intended to sketch, build and then test a 3D printer that can print and cook food. Their secondary goal was to study some of the food sources and to see how they behave while printing. And they managed to do that! 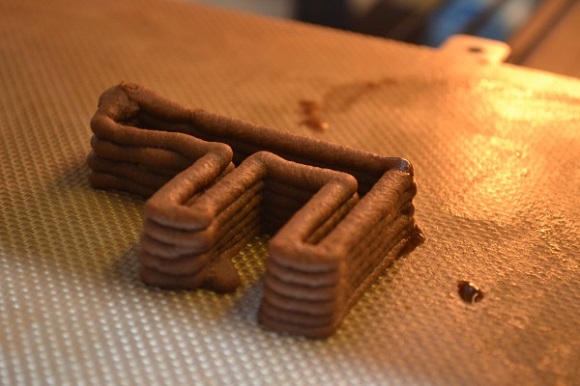 To develop their 3D printer the students reworked RepRap 3D printing technique. Like the majority of 3D printers, F3D has been designed to print STL files generated using CAD software. DUET and DUEX4 bundle control the printer, that can operate up to five various paste extruders. They’ve also managed such difficulties connected with food 3D printing like suitability of the cooking system and the food and extrusion points. Initially they decided to develop a printer that can operate 3 extruders, so they studies a number of options before dealing with a combination of Hod Lipson’s Fab@Home paste extrusion system Richard Horne’s Universal Paste Extruder and Thingiverse user keesj’s Simple Paste Extruder. 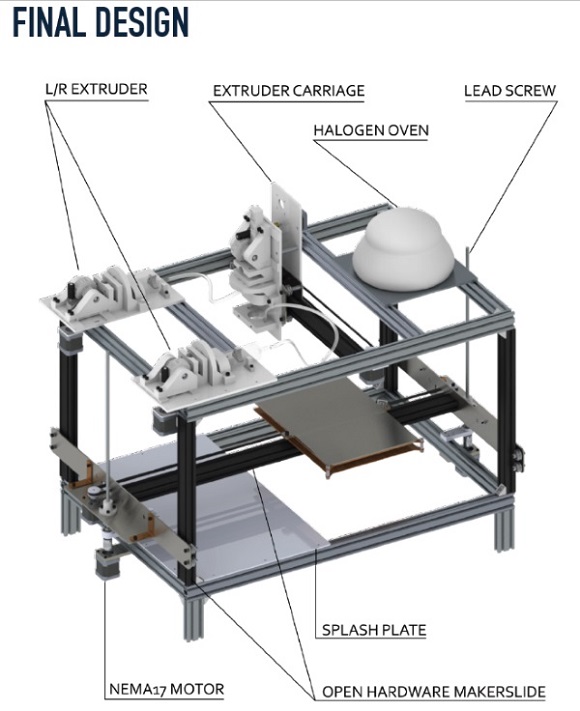 In their paper they explained that one of the advantages of using the air pressure-forced syringe controlled by a number of solenoid valves is its better flexibility and compact nature. But the common 3D printing software is written keeping in mind the mechanical setup, and its alterations will require a lot of time. What’s more, the use of air pressure system may be too much for the budget. That’s why they’ve chose the mechanically driven system. So they can print three various ingredients for one meal, but in the process of their development they came up with some problems. 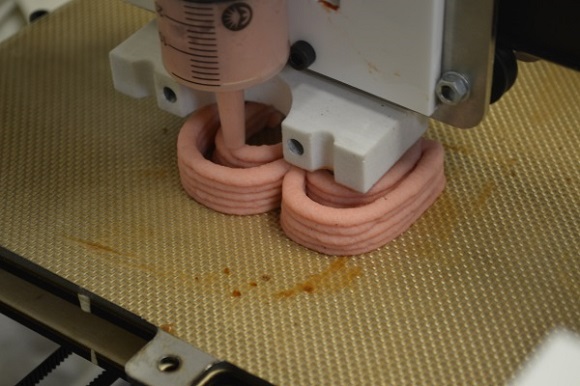 First of all, some foods available are not so tasty and edible. In their paper they explained that the biggest difficulty with printing food is that it has to be in a paste. It’s obvious that foods in such a form aren’t available now, that’s why food processing must be developed for further support of 3D food printing. They tried to make meat paste of ground lean beef, but what they got was no good for extrusion and they had to choose three remaining ingredients. In contrast to Foodini 3D food printer, F3D has inbuilt cooking system to cook pizza. The system resembles the one with something like 1200 to 1400W halogen ovens. They are flexible and don’t occupy much space and have quite short cooking time.

Although this machine doesn’t yet mean that 3D printed food is part of our everyday life, London students have made important contribution to this process. In their paper they also mentioned that their invention could become a solution to starvation and hunger problems in the countries of the third world, which are becoming more and more urgent. What’s more, the growth of the world population means the growth of food demand. Alternative nutritious foodstuffs like rich in protein insect paste might be the solution to this problem; but only on condition that they are incorporated into already known dishes can their perception be changed and they become widely acceptable. In our epoch of computer technologies such a device will become a cheap solution to nutritional needs of the poor countries.