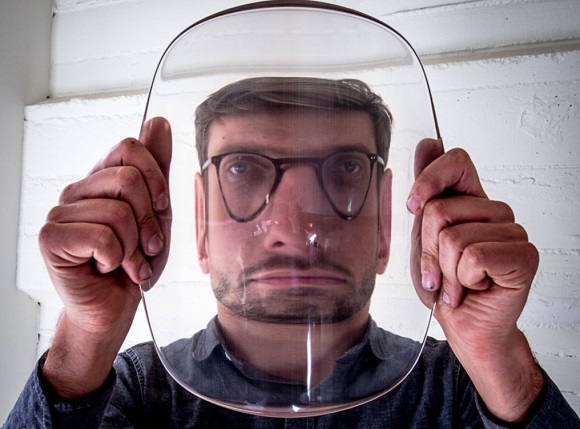 If you have ever seen an iPad and tried to use it, you probably know the pre-installed application Photobooth, with which you can take pictures of yourself in various crazy distortions. It’s a kind- of freak selfie-taking and some people are even likely to be scared  if they are not careful enough. Would you like to get the similar effect but not with a too costly Apple iPad, but with a simple lens? Robb Godshaw and Max Hawkins, both being artists, have come up with an idea how to achieve that. All they needed was just a collection of 3D printed customized lenses called “Smaller and Upside Down”. 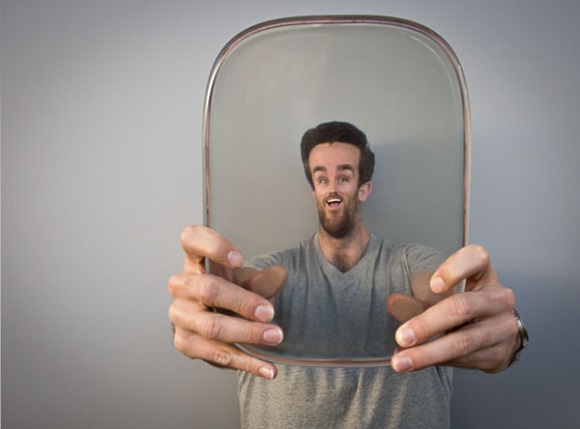 Godshaw explained that first lens were made when he was developing a projector for robotic sculpturing. He managed to develop the projector for the sculpture himself, but it was difficult for him to find a proper projection lens that would fit his requirements. All the lenses that were available were either too expensive, or too small. Then he decided to create a lens of his own, though he knew very little about optics. He found a block of acrylic plastic and with a 3-axis CNC router made it a lens-shape and the lens did work!

Then he decided to use a 3D printer to check if it could work better. First he developed the lenses with Rhino and Neon software, but in fact any modeling software possessing ray tracing feature would be just as good. Ray tracing gives users a better understanding of how lenses distort everything behind them as soon as it is developed. Other suitable types of software can be Fusion 360, Blender, Maya and others. The lenses are largely made of plastic, not glass, that’s why Godshaw estimated that the refraction index value was different from that of glass. Normally it is 1,52, but he found out that the index of 1,63 suited better for 3D printing design. 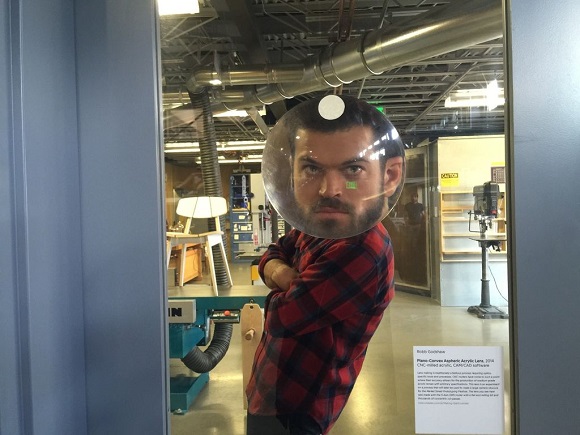 When they had the right design, they sent it to be 3D printed. Godshaw is an artist in residence at Autodesk Pier 9 Workshop. It possesses several industrial 3D printers, so they could use the proper additive manufacturing materials and machines. Hawkins and Godshaw managed to use the Object Connex 500 3D printer by Stratasys to its full potential for printing their lenses with VeroClear transparent resin developed by Stratasys – that is a colorless rigid photopolymer that feels like rubber.

The two developers confessed that it was very easy to print the lenses. They just pressed the “print” button, left the printer working for a night and in the morning they came back and found the lenses ready. But there was a lot more for them to do – they were to sand and polish the lenses, which required several steps. Finally the lenses appeared to be quite good, allowing making all kinds of face distortions.

The work by Godshaw and Hawkins, which consisted of 3D printing the lenses and milling out the acrylic plastic on the three-axis CNC router, was displayed a couple of weekends ago in San Francisco during the Market Street Prototyping Festival. You also may find more information about the project on Instructables.