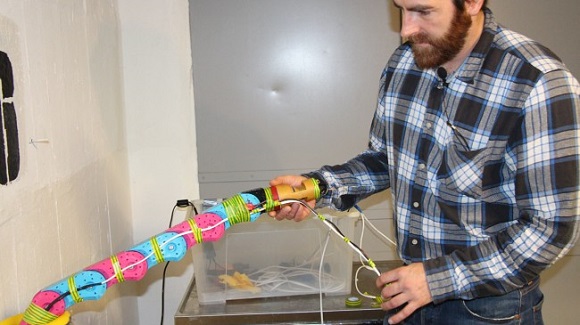 Last December the TRACT project was launched the European Union. Now there are a number of research centers and companies participating in the project. It has been started to develop robotic examination of different types of pipes, among which there can be complex branched pipe systems The project, which now encompasses a number of companies and research centers, has been initiated to provide the robotic inspection of various different types of pipes, which include complex branched pipe systems; to allow quantification of those systems without closing them down temporarily. The 3D printed prototype is now being created for the project. It is a robot, which looks like something average between a mechanical water snake and a motorized eel. It is of great use for both the developers and the project. 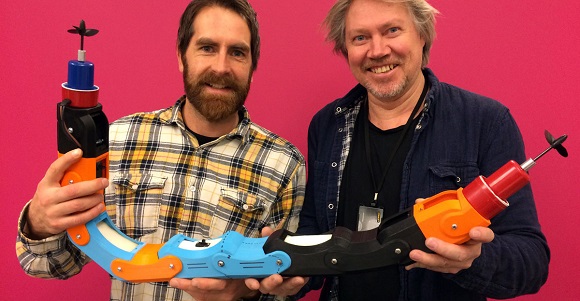 Gorm Johansen of SINTEF and Fredrik Lund of Inventas with the TRACT robot. (Image Credit: Inventas)

The TRACT project has tossed together a great number of research centers and companies like Norwegian municipalities and research colleagues Spain, Italy, Norway and overseas. One of the enterprises included is Breivoll Inspection Technologies, a small but notable company, consisting of five employers.

Lars Brenna from Breivoll told Phy.org that such a kind of inspections are one of the most difficult procedures they have to deal with in the field of water distribution. But they hope that the concept they develop these days will help them solve most the difficulties they face. In Norway, for instance, the essential water losses (about 30-40%) are due to the low quality of water pipes. That’s why they are forced to find innovative ways out. But it’s not only Norway that suffers from such difficulties. So Breivoll Company aims at creating the global market for the TRACT concept. 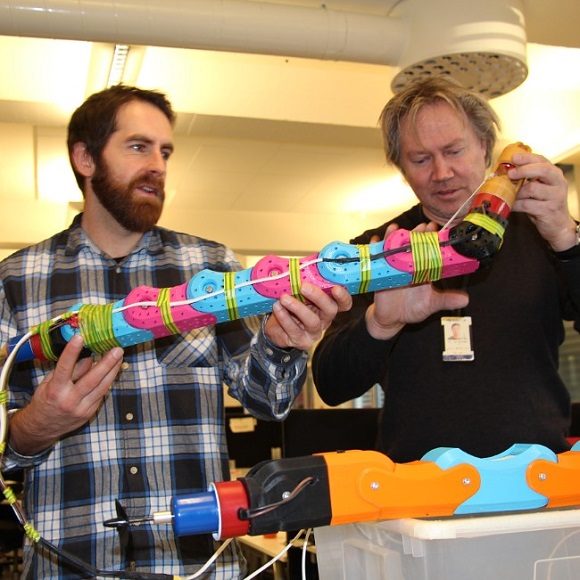 The company is also working with Det Norske Veritas fund to use the results of the company’s research into advanced ultrasound. They are going to use sixty-four ultrasound sensors to count the corrosion and the thickness of the pipe systems. These sensors are to be developed into the thin and long propeller-driven robot.

The industrial design company Inventas and SINTEF ICT are responsible for the R&D of the robot’s mechanical design. Inventas has 3D printed a composite sample of the robot, which has already been tried out in a water-filled pipe.

Gorm Johansen from SINTEF explained to phy.org that the units of inspection they use these days are very long and large. Now they are working on the unit that will be able to go through the narrow pipes of 10 centimeters in diameter. Now it will be possible to send the robot 150 meters into the pipe and to manage with junctions with angles up to 90 degrees. The unit should have the minimal possible contact with walls in the pipe so as to reduce the number of rust pieces coming into the water. It means that it has to be even smaller than the robots they have today and it should have fewer sensors. 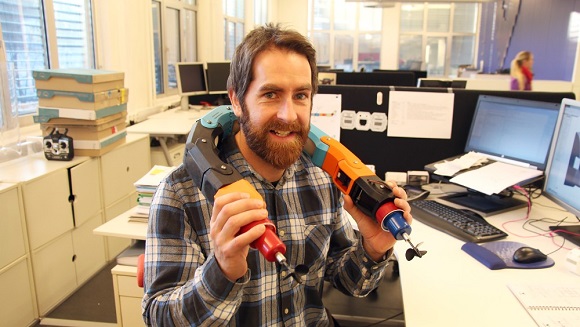 Mr. Johansen repeated that most of the pipe inspection units they use nowadays are either belt driven or wheel driven. These techniques may cause particles of contaminants to be detached from the pipe’s bottom. Instead the new robosystem uses reverse and front propellers to fin along the piper’s wall. The robot moves along the pipe and at intersections feels for the right way and then bends to continue going along the right way. Ultrasound signals get in touch with the pipe’s walls, transmitting the information concerning the thickness of the pipe’s wall. To take measures along the whole length of the pipe it’s necessary for the robot to be able to rotate. To achieve that Inventas locked each end of the robot. The TRACT project is expected to be completed by the end of the year partially thanks to 3D printing technology.