3D printed nanostructures made up of graphene developed by Korean scientists

3D printed nanostructures made up of graphene developed by Korean scientists

This is the first time scientists from Korea Electrotechnology Research Institute (KERI) have managed to show 3D printed nanostructures made totally of graphene, the material quite promising for future experiments. The breakthrough approach was published in Advanced materials edition from November, 3, 2014. It consists in applying stretched liquid ink meniscus to create 3D reduced graphene oxide nano-wires. 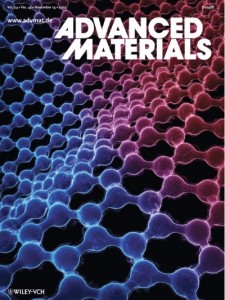 In contrast to other 3D printing methods that use powders and filaments as printing materials, method by KERI seems more improved. This helps them develop better printed structures rather than a nozzle aperture, resulting in creating nanostructures. This is an important achievement for 3D printing world, where graphene is of extreme importance. Graphene is a fullerene consisting of bonded carbon atoms in sheet form one atom thick. It’s a fundamental building material of all the graphic materials. It’s renowned for its wonderful qualities like flexibility, transparency and marvelous conductivity, which make it the perfect material for almost anything from electronics to commercial applications.

But one of the most difficult tasks for researchers is to manage graphene sheets at nanometer and micrometer scales, which need extreme precision. Additive manufacturing is likely to become the only possible solution. Professor Seol and his team in their article described that they used liquid meniscus as a better approach to 3D printing at nanometer scale. Graphene oxide (or GO) wires were developed at room temperature with the meniscus that was formed on the tip of the micropipette. The wires were diminished using chemical or thermal treatment. Pulling the micropipette when the solvent was rapidly evaporating they managed to achieve GO deposition. That’s how they enabled GO wires to grow. Tuning the pulling rate allowed scientists control the wires and thus they managed to reach the minimal value of ca.150 nanometres. 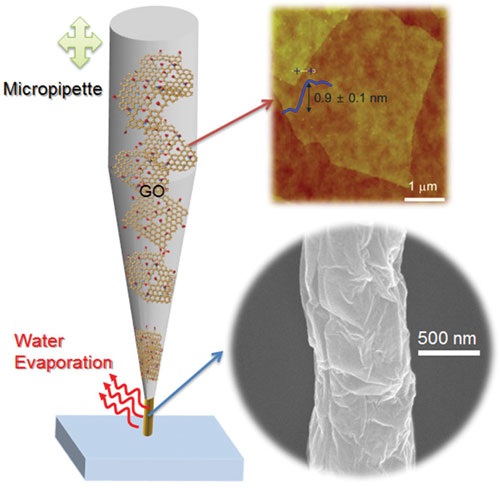 The scientists say that their method is very effective for 3D printing graphene nanostructures and also 3D nanoprinting of multiple materials. This technology helped them create a wide range of freestanding rGO architectures, among which there are suspended wires, bridges, woven structures and straight wires. Complex filaments to 3D print graphene strengthened plastic structures with FDM printer have been suggested, but with it some difficulties have appeared. Graphene adds a lot to the properties of plastic used in this scenario, but at the same time plastic makes graphene properties worse.

In addition the common FDM printing can’t make printed structures smaller in size to suit the normal nanometer scale. As far as the team are concerned, 3D printed nanostructures haven’t been reported to consist totally of graphene. At the same time they’re sure that the new method will open up new ways to implement 3D patterns for printed electronics. Indeed, their new method will become a breakthrough in 3D nanoprinting technology. It is efficient in 3D printing of all kinds of electronics like transistors, sensors and solar cells to name just a few. Some of the difficulties haven’t been solved yet, 3D printing technologies with the use of graphene look really promising.