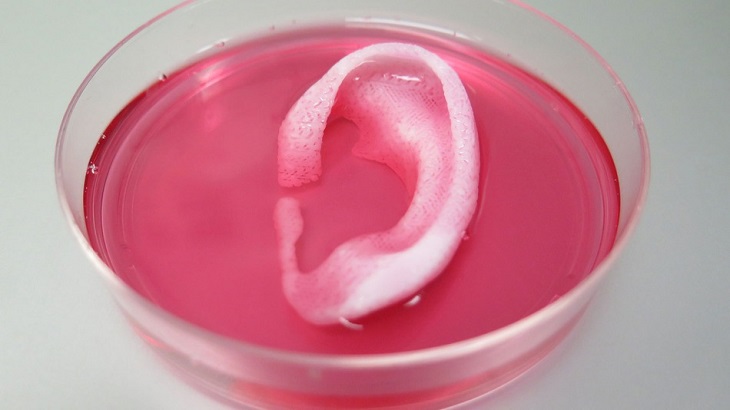 3D printing has given us a chance to develop numerous trifles, smart-phone cases, even braces for broken limbs. Now it is time for us to have a 3D printed ear. Scientists from Wake Forest Institute for Regenerative Medicine have carried out a research and published its results in Nature Biotechnology (a peer-reviewed magazine), which tell the readers about an unconventional 3D printer that can help develop biocompatible tissue. This new kind of tissue can be further used as transplant material to be used as part of cartilage, bone, muscle or even the whole human ear. However this moment is a bit far off as the tests haven’t been carried out on people and the research isn’t over yet. The team from Wake Forest Institute has already tested 3D printed tissue on lab rats. After five months they found no necrosis and some new vascularized tissue in the implants.

The kind of printer scientists are going to use for this enterprise is ITOP, or integrated tissue-organ printer. Indeed the process of developing human organ tissue is not easy at all, and the team faced many obstacles on the way to their achievement. The ITOP printer they use allows to work accurately at a small scale, which is what the team exactly needs to mimic capillaries.

In one of the interviews Anthony Atala, one of the members of the team, told that the material they use for such structures is cell-laden hydrogel, which works as a kind of bio-ink. But one of the greatest difficulties is to keep cells and tissue alive. The problem is that in volumes larger than 0.1-0.2mm they die. To keep them functioning the cells must be near the blood-carrying capillaries, which provide nutrition, without which survival is impossible.

By now the team has already designed microchannels in the whole structure, which make it possible for nutrition to go inside and thus keep the tissue alive.

This project, if it is a success, will become a real breakthrough in medicine, as previously 3D printing has been used by doctors only to make models of organs before difficult surgeries.