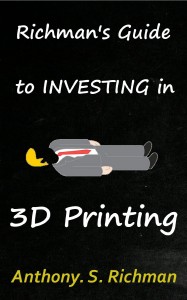 Don’t miss out on what is now billed as the third industrial revolution. The potential from getting in early is huge. This could change your life for ever. It’s changed mine and this is only the beginning.When I first invested in 3D printing stocks, most investors had no idea the technology was already being produced, and that they could make money on it. A lot of money. They had no idea what stocks to invest in or who even produced these printers. I share this knowledge in my book.

The mainstream news media didn’t seem to know that this 3D technology even existed. Now they are more and more aware. It’s starting to be advertised. As more people jump on the bandwagon, it’s important to already have invested in the few companies who are at the forefront of this exciting new technology.

Did you know that there is a company that has developed a 3D printer that can print organic human tissue. Or did you know that development is in progress to automate the entire 3D printing process. Think what this could mean for the future. Do yourself a favor and don’t get left behind.